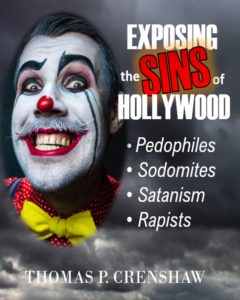 Who’s Who?  For the First Time, You will Discover Who the REAL Hollywood Predators are and Where They are Hiding.

Through much research, investigations, and personal contacts, the author exposes Hollywood Predators. In other words, the “Sins” of celebrities and entertainers plus those of history.

The author leaves nothing to the imagination.  The sexual abuse and satanic rituals that many young celebrities must endure in order to further their careers are “unthinkable”.

I dare you to read this startling book and find out for yourself, the crimes, child sex abuse, rapes, and sexual perversions that go on almost daily inside the sleazy Hollywood executive mansions. You’ll never look at your favorite entertainer the same way again.

“Hollywood Predators” covers the sexual desires and sexual DEVIANCES of a host of various Hollywood stars, entertainers, and other famous people.

As the author of this book, please do not blame me for the actions of others. I’m ONLY the messenger. Yes, there are many shocking and disgusting details inside the book. If you’re disgusted by the actions of your favorite celebrities, then you’re NOT alone.

I certainly did not create this book to make enemies. My mission for this book is to put a LIGHT on the DARK side of Hollywood.  Yes, Hollywood is not only an illusion, but your favorite actors and actresses “Lives” are also an illusion as well. They are NOT who you think they are!

“I knew there were lots of Hollywood creeps but didn’t know most were the ones I really enjoyed.”  -Anonymous

I almost did not insert much of the disgusting details about “Hollywood”, but I promised to be transparent in everything I know and discover.

Please . . . scroll back up and grab your own copy of this book. (if you dare) and please spread the word

You can read this shocking eBook right now.  Instant download.
Low – low price for a single copy. Only $9.99