Inside you’ll discover that I seldom provide any opinions.  I’m just the messenger bringing you the facts.   Get Conspiracy FACTS.

The conspiracy facts you’ll discover inside these pages are just the information at the time of the writing of this book. I’m sure there will be many more deaths in the future.  I can almost guarantee it. 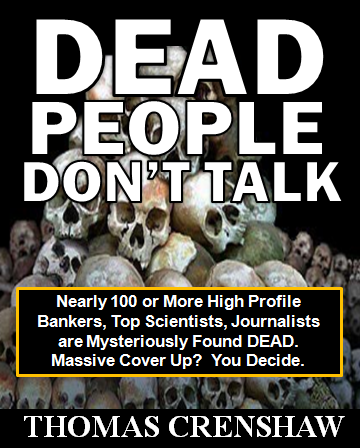 Thomas J. Hughes had everything to live for.  He was twenty-nine years old and had a long, prosperous life ahead of him.  He had a job he loved at a prestigious Park Avenue investment bank in New York City.

Thomas’ friends described him as happy, jovial, good looking, and very sociable.  He was single and was living in a million dollar apartment.  Why then on the morning of May 28th did Thomas go up to the roof of his luxury apartment building and jump off, falling twenty-four stories to his death?

The press is satisfied with calling these conspiracy facts just another case of Wall Street high pressure and stress becoming too much for someone.  Evidence of drug use was found in Thomas’ apartment leading the mainstream media to conclude that this was just a mix of drugs, alcohol, and the fear of failure.

Thomas left no note nor gave any indication that he could be contemplating such an act.  Thomas, is dead after falling twenty-four stories.

Nothing more to see here, right?  Well, not so fast.  Thomas’ case is just the latest in a rising tide of such deaths.  It seems that bank executive is becoming a very high-risk profession.  Since January 2013, there have been over seventy suspicious deaths of high-level bank executives around the world.

Many of these classified as suicides and many of those by leaping off of high buildings, though one banker supposedly shot himself seven times with a nail gun!  Is this possible? I suppose so – but it’s a little weird.

And there seems to be a VERY high concentration of these “suicides” involving current or former employees of JP Morgan.  The same JP Morgan that was one of the six companies recently found guilty of manipulating the foreign exchange market and fined billions.

Theories abound by what’s at the root of this and there may very well be more than one motivation at work.  The deaths could be to silence whistle-blowers and to deter any who might expose efforts to manipulate markets.

Many suspects that the high-frequency trading done by computers is rigged and an insider who might leak the details could have their “account reduced to zero” if you know what I mean.

Melissa Millan, a senior vice president with the Massachusetts Mutual Life Insurance Company, was jogging when she was attacked and stabbed in the chest with an “edged weapon”.

It’s now known that Millan had access to confidential and highly sensitive information about the profits large banks are making on what the industry calls “dead peasants insurance”.

Mysterious Deaths of Bankers are Now Classified as “Trade Secrets”.  What’s going on?